HAMILTON, ON – The City of Hamilton has shared the recipients of the 2021 City of Hamilton Arts Awards. Among those honoured is celebrated author, musician, and visual artist Tom Wilson receiving the Lifetime Achievement Award.

Lifetime Achievement Award is conferred annually to recognize living artists or arts managers who have contributed substantially to the artistic vitality of the city over the course of a career, and have inspired others through their leadership, creativity and artistic excellence. These individuals’ experience and impact may be local, national or international in scope. The Jury, comprised of Hamilton arts sector leaders from diverse backgrounds, shares their reasons for selecting the award recipients in the 2021 City of Hamilton Arts Awards Digital Magazine 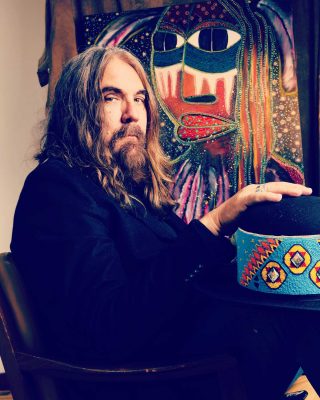 The jury selected Tom Wilson as the 2021 Lifetime Achievement recipient due to his exceptional accomplishments and excellence as both a musician and storyteller. They feel that Tom is genuine and honest in his craft and acknowledge the powerful vulnerability he demonstrates in exploring his Indigenous heritage through his art. His impact is felt to echo both nationally and locally. The jury appreciates Tom’s contribution to the local community such as his sponsorship of an Indigenous student scholarship at McMaster University. They believe it is fitting to confer the Lifetime Achievement Award to someone who has deep roots in Hamilton and has demonstrated a lifetime commitment to advocating for local arts and music; Tom Wilson shows Hamilton artists what it is possible to achieve.

About the Tom Wilson Indigenous Scholarship Award in Honour of Bunny Wilson.

The plan to start a scholarship program at McMaster University began as a result of a celebration of my archives being donated to the McMaster Library. I wanted to begin paying forward my own fortunate circumstances and so I started the wheels turning to establish the Tom Wilson Indigenous Scholarship Award in Honour of Bunny Wilson.

The Events
The events will occur in tandem, with the Archives ceremony on January 20th, 2022 followed by a concert to raise funds and awareness for the Scholarship on January 21st and 22nd at The RL Wilson Concert Hall at McMaster University
I will be donating the proceeds of the January concerts to McMaster University for the creation of a student award for indigenous student(s).
The production and marketing of the concert will be managed by my team, with McMaster providing in-kind support e.g. use of space, assistance with logistics and ‘red tape’, and support with promotions and ticket sales.

The Scholarship
The Tom Wilson Award established in 2020 to support indigenous students from Ontario secondary schools completing an undergraduate program in any faculty. It was established to help bring honour, love, respect and shine a light back on the culture I have been introduced to later in life, and to honour the charitable nature that Bunny Wilson who raised me embodied throughout her life.
This award is dedicated to empowering the next generation of indigenous people that will lead us into the future.