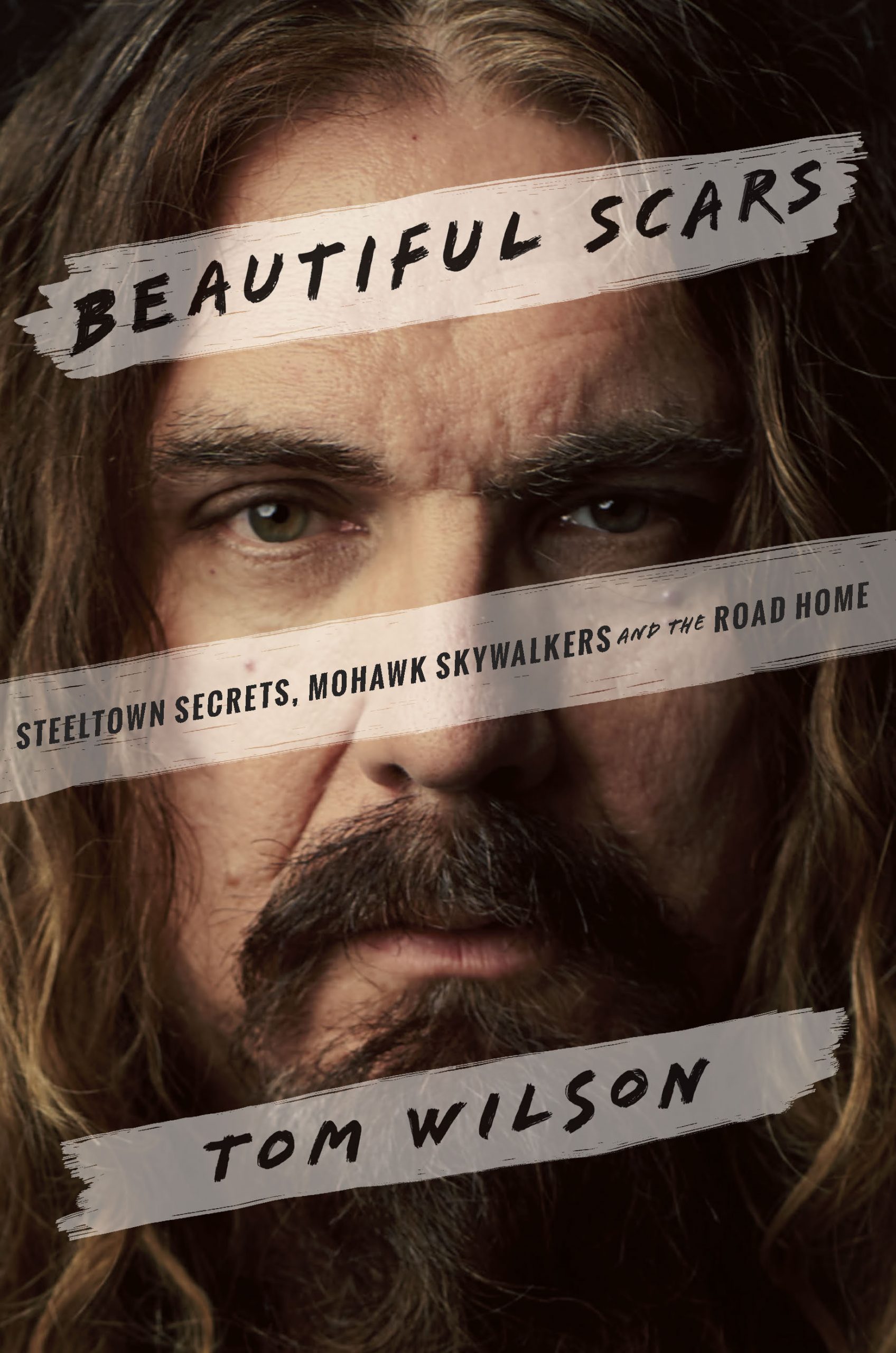 Beautiful Scars -Mohawk
The songs, the stories and the art of Tom Wilson

Tom Wilson was raised in the rough-and-tumble world of Hamilton—Steeltown— in the company of World War II vets, factory workers, fall-guy wrestlers and the deeply guarded secrets kept by his parents, Bunny and George. For decades Tom carved out a life for himself in shadows.

He built an international music career and became a father, he battled demons and addiction, and he waited, hoping for the lies to cease and the truth to emerge. It would. And when it did, it would sweep up the St. Lawrence River to the Mohawk reserves of Quebec, on to the heights of the Manhattan skyline.

With a rare gift for storytelling and an astonishing story to tell, Tom writes with unflinching honesty and extraordinary compassion about his search for the truth. It’s a story about scars, about the ones that hurt us, and the ones that make us who we are.

Tom’s art exhibit Beautiful Scars: Mohawk Warriors, Hunters, and Chiefs premiered at The Art Gallery of Burlington in 2019. Wilson’s painting is among esteemed Indigenous works from Maxine Noel, Roy Henry Vickers, Christi Belcourt, Norval Morrisseau, to name a few of the many who are part of the Eagles Rising campaign through Artists Against Racism.”

“Over the course of discovering my true identity, the intention of my writing, my music and my art is to reduce the gap between my indigenous culture and colonialists to make a more patient, loving community.” – Tom Wilson aka LeE HARVeY OsMOND

When Tom Wilson created the moniker Lee Harvey Osmond he wasn’t entirely certain if this was a new stage name or merely a provocative handle for the musician/artist collective assembled by producer Michael Timmins to record a collection of Tom Wilson songs that would become “A Quiet Evil”. This was the first of four albums bearing the featured artist Lee Harvey Osmond. “The Folk Sinner” was next, followed by the break through “Beautiful Scars”. It was during this time between releasing “Beautiful Scars” and recording “Kings and Kings” with Blackie and The Rodeo Kings that Wilson went public with his recent discovery. He was not exactly the person he thought he was.

A couple of decades have passed since Wilson’s major label foray as the leader of his rock band Junkhouse. There were follow up solo releases, “Tom Wilson’s Planet Love” (Columbia) and “Dog Years” (True North). Both of these albums featured songs that were clearly an extension or evolution of the sound that Junkhouse had established over three albums with Columbia Records. Although, his collaborations with Blackie and The Rodeo Kings were thriving, Wilson was wandering in the musical wilderness searching for his own distinct vision for his solo career. It was through his connection with the kindred creative spirit of producer and Cowboy Junkies founder Michael Timmins that the sound, the voice and the alter personae Lee Harvey Osmond came to life. Wilson reasoned that many Tom Wilsons were making records BUT there could only be one Lee Harvey Osmond. The name evoked early memories for Wilson, growing up in Hamilton, Ontario in the 1960s.

In mid-life, in his 50s, Wilson learned that the parents who raised him were not his birth parents; that, in fact, he was adopted and that his biological mother and father were Mohawk from the Kahnawake reserve, just outside of Montreal. Grappling with this newfound sense of himself plunged Wilson into a quest for his heritage and his truth, and led to the writing of his bestselling autobiography, Beautiful Scars (Doubleday Canada). The book is a colourful and truthful tale of this quest, and his life’s tribulations and successes along the path.

“It is a story of finding your way home,” he says. “It’s a story of adoption, of growing up thinking you’re a big, sweaty, Irish guy, and finding out at the age of 53 that you’re a Mohawk.”

He is still driven to ask questions, to seek meaning from the elusive mysteries hidden beneath the surface of everyday existence, to come to terms with his history, his identity; to aspire to higher truths and to understand his place in the world. “If I have 20 more years on this planet, I hope to keep becoming a Mohawk, because I can’t become a Mohawk the way my brothers and sisters and ancestors did.”

Wilson’s life has been an ongoing quest so it is perhaps inevitable that after decades immersed in poetry, literature and music he would turn attention to visual art, a language that transcends the verbal and the written. The packaging and visual elements of “Mohawk” incorporate Tom Wilson creations. In particular a painting of the same name from his collection Beautiful Scars: Mohawk Warriors, Hunter and Chiefs

“My music and my art is a continuation of my long way home,” Wilson says. “It is my way of showing honour and respect to a culture that I’m just shaking hands with.” The discovery of his true heritage and the culture that it carries now informs all of his art.

“My truth was hidden from me – I was born a Mohawk baby, and finally I’m becoming a Mohawk man.”

“Beautiful Scars is a frank and fair, raw and loving look at what it means to grow up with the silver spoon as far from your mouth as it can get, a confession that celebrates the miseries and joys of working-class life, of musicianship, of chasing secrets, of fighting through to discover the person you didn’t realize you were. This is a remarkable, generous, big-hearted book that will stick with me for a long time.” —Guy Vanderhaeghe, author of The Englishman’s Boy, The Last Crossing and A Good Man

“The book isn’t just good. It’s stunning. . . . The secrets around [Wilson’s] life form a fundamentally Canadian story, rich in history and steeped in darkness. They also separate Beautiful Scars from the ranks of the typical rock memoir, and place it firmly on the shelf with the likes of Angela’s Ashes and The Glass Castle—riveting accounts of family and secrets, poverty and peril, adversity and triumph.” —Quill & Quire, starred review

“A helluva story. . . . Wilson has the ear of the poet and the eye of the painter. He manages to pick just the right anecdote to sum up a personal feeling, at the same time as capturing a broader cultural moment.” —Hamilton Spectator

“This is not your typical recollection of a debauched life of sex, drugs and rock ‘n roll. . . . The storytelling ability present in Wilson’s songwriting translates to the written page with real ease. He has a direct cut-to-the-chase style, but is still capable of delivering poetic imagery. . . . This [is] an inspiring read.” —Toronto Star

“Beautiful Scars is like Cataract City, only true, mixed with the kind of rock memoir you were scared to read. Wilson, musician and shockingly fine storyteller, is from Hamilton, Ontario. And not the bougie new Hamilton. That should tell you all you need to know.” —The Title

“This incredible story is handled with grace, grit and a real feeling of a boy, then a man, trying to find their place in the world.” —Vancouver Sun

“A funny and poignant memoir about family, identity and coming to terms with unexpected truths.” —Zoomer

“A dread of unknown origin cloaked and nearly choked Tom Wilson, but his voice continued to soar and what emerges here is an incredible tale of inclusion and devotion and love.” —Ron MacLean

“Tom writes with charisma, humour and passion. There’s a depth to his story—full of a trauma and mystery—that helps explain the arc of Tom’s life and career. If you’re already a fan, you’ll love him even more after reading this.” —Max Kerman, The Arkells

“Tom Wilson’s memoir, like his music, keeps a measure of time that is so beautifully his own. This is a life, a story, born of secrets and lies, of dark humour and love. Its song will stay with you.” —Ryan Knighton, author of Cockeyed

“Wilson’s memoir is much more than yet another retelling of the sex-drugs-and-rock-and-roll story that many other musicians before him have told. All of that is in the book . . . but beneath and behind this, always there lurks Wilson’s search for truth and his place in the world. . . . [Beautiful Scars] is more than a book. It is a precious gift, a legacy of insight and truth from a father who finally knows who he is and where he belongs.” —Hamilton Review of Books