TORONTO, ON – MONDAY, JUNE 7, 2021 – JUNO award-winning artists iskwē and Tom Wilson (Junkhouse, Lee Harvey Osmond, Blackie and the Rodeo Kings) are excited to share their new single – a stunning rendition of Misha Bower’s song “Starless Nights” out now on Red Music Rising. “Starless Nights is a beautiful song, written by an incredible songwriter Misha Bower;” says iskwē. “When I was at Words Fest in London, Ontario, sharing in a conversation/songwriters circle with Misha; she performed this tune acoustically and it was mind-blowing. It was one of these songs that the moment you hear it you get shivers.” Tom Wilson adds, “The song was a natural fit for us. It’s otherworldly.” The song is beautifully complemented by a lyric video highlighting one of Tom’s paintings used as the single artwork. Watch the official lyric video here. Listen and buy the new single here. 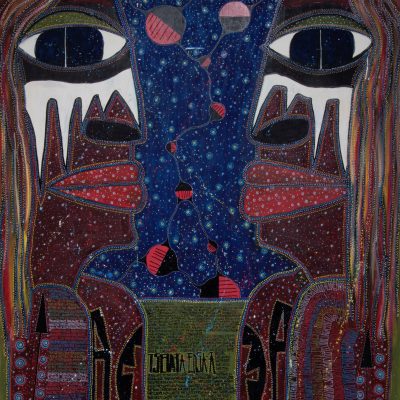 “Starless NIghts” is the follow-up to their debut single “Blue Moon Drive” released this past November. This new collaboration began as a gig at the 2020 Indspire Awards. “It was the luck of being asked to perform together by other folks that brought us together,” says iskwē. “We had never sung together so until we actually stepped up to the microphone and started to sing we didn’t know that we had a little bit of magic going on between us,” adds Tom.

The new song was recorded live off the floor with an incredible group of musicians from Jukasa Studios in Six Nations, ON. “Assembling the musicians for our rendition of Starless Nights came naturally, enlisting the incomparable Anna Ruddick on bass. Anna and my long-time collaborator percussionist Ray Farrugia locked in the tempo and the pulse of this haunting ballad written by Misha Bower,” says Tom. “Our secret weapon on this track was legendary guitarist Bill Dillon, known for his work with Joni Mitchell, Sarah McLachlan, Edie Brickell and many more, Bill was the perfect counterpoint for iskwē’s fearless performance.”